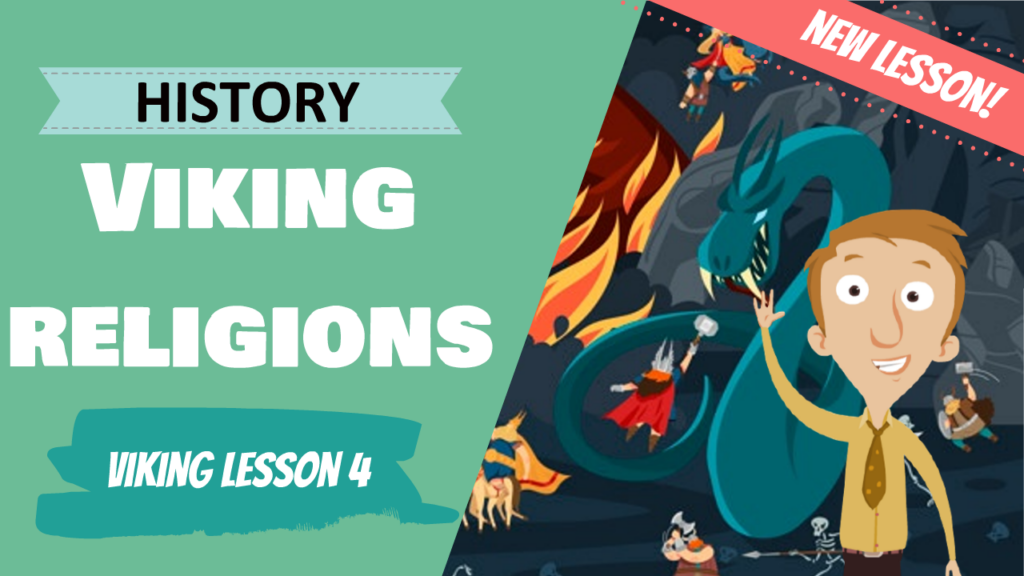 In this lesson, we take a look at the religious beliefs of the Vikings. We'll meet a few Gods and Goddesses and see where they lived. Then we will will learn about some of the creatures the Vikings believed in!
Download PowerPoint

Gods Top Trumps
In this activity, children will create their own deck of Top Trump cards for the major Gods and Goddesses of the Norse religion. Then they can play a game against each other
Download Activity

Creatures Flipbook
In this activity, children will be given a selection of Norse mythological creatures to create a flipbook with. They will read the description and try draw a picture of what they think it looks like
Download Activity

Everything you need to give this lesson a try. On the left side we have our lesson objectives, in the middle are the activities and on the right are the assessment tools!
Download Lesson Plan

1) The child should be become familiar with aspects of the lives of these peoples:
-homelands -homes of people -food and cooking
-links these people had with Ireland or Europe
-arrival, settlement and life of these people in Ireland

-Assessing Prior Knowledge: The children will think, pair, share with a partner about what Ireland was like in the Early Christian times before the invasion of the Vikings. -Compare and Contrast: Children fold an a4 paper in half. On one side they draw what they think pre-viking Ireland would have looked like. What would the building have been like? What about clothes etc. -Guided Audio Tour: The class will close their eyes. The teacher will describe a picture of what a typical Irish settlement would have looked like at this time. The children will try to form a picture in their heads of what it would have been like. Compare and contrast their first drawing with their second drawing. -Direct Teaching: The teacher will explain that Ireland was a very different place in the Early Christian times. Using PowerPoint, the class will discuss what life was like for normal people during this time. -Clan Wars: Each group will be divided into different Early Christian tribes that were living in Ireland before the Viking invasion. They must create the following for their tribe: 1) A name for their tribe. 2) Choosing their ‘Rí’ and making a tin foil ‘torc’ for him/her. 2) Their tribe crest drawn and coloured onto cardboard shields 3) Their war cry -Clan Wars: Adapted version of dodgeball, using softballs and the ‘clan shields’ created in the previous activity. The native clans will meet each other on the battlefield to take over each other’s land in a game of dodgeball. Players may block balls with their shields. -Alternative Clan Wars: If the above is not possible. Mark a playing area big enough for two tribes. Play an adapted version of ‘capture the flag’. Two tribes stand across from one another. In the middle of the zone is a ‘flag’. Tribes must capture the flag and return it to their village without being tagged by the other tribe. Children may use shields to block tags. Once tagged, they must return to the village. If the ‘Rí’ gets tagged, the whole tribe are out.

-Teacher Observation -Teacher Designed Tasks -Teacher Questioning: 1) Do children understand that Celt tribes were divided and usually fighting one another? 2) Can children describe some features of life in a Celt village? 3) Can children explain what Ireland was like before the Vikings came?
Rang Maher